Amazon Web Services is the canonical infrastructure cloud provider. EC2 beta was announced in 2006 and started with just one instance type: m1.small.

This profileration is due to (I believe) three drivers: customer demand, enterprise adoption and advances in hardware. This is great, I have no gripes about the usefulness of the new instance types. I’ve had customer cases where “hi1.4xlarge” would have been the perfect solution but just was not yet available. Similarly the introduction of PIOPS and SSDs was a godsend for database-type workloads.

But what happens to old stuff? What about the old hardware? What about m1.small which has been around for 7+ years?

Currently the AWS instance types can be grouped to roughly three categories:

It is easy to see that the last category will pose difficulties in the future. The GK104 GPU is already a previous generation GPU with its successor (GK110) having been in production since May 2013 (both are based on the same GPU family architecture, e.g. Kepler). What happens when GK104 becomes unavailable?

This leads to interesting economical dynamics. Let’s assume that year-to-year AWS purchases enough g2 class hardware to increase each instance type’s capacity by 100% and each hardware generation is on sale for 2 years, and that each new hardware generation will be initially purchased at same capacity as the previous generation. Looking at the graph below you’ll see that at year 3 the first-generation g2.2xlarge will represent one fifth of the total available capacity. (Caveat emptor: These values are completely arbitrary, so don’t rely on them even if they would seem sensible.) 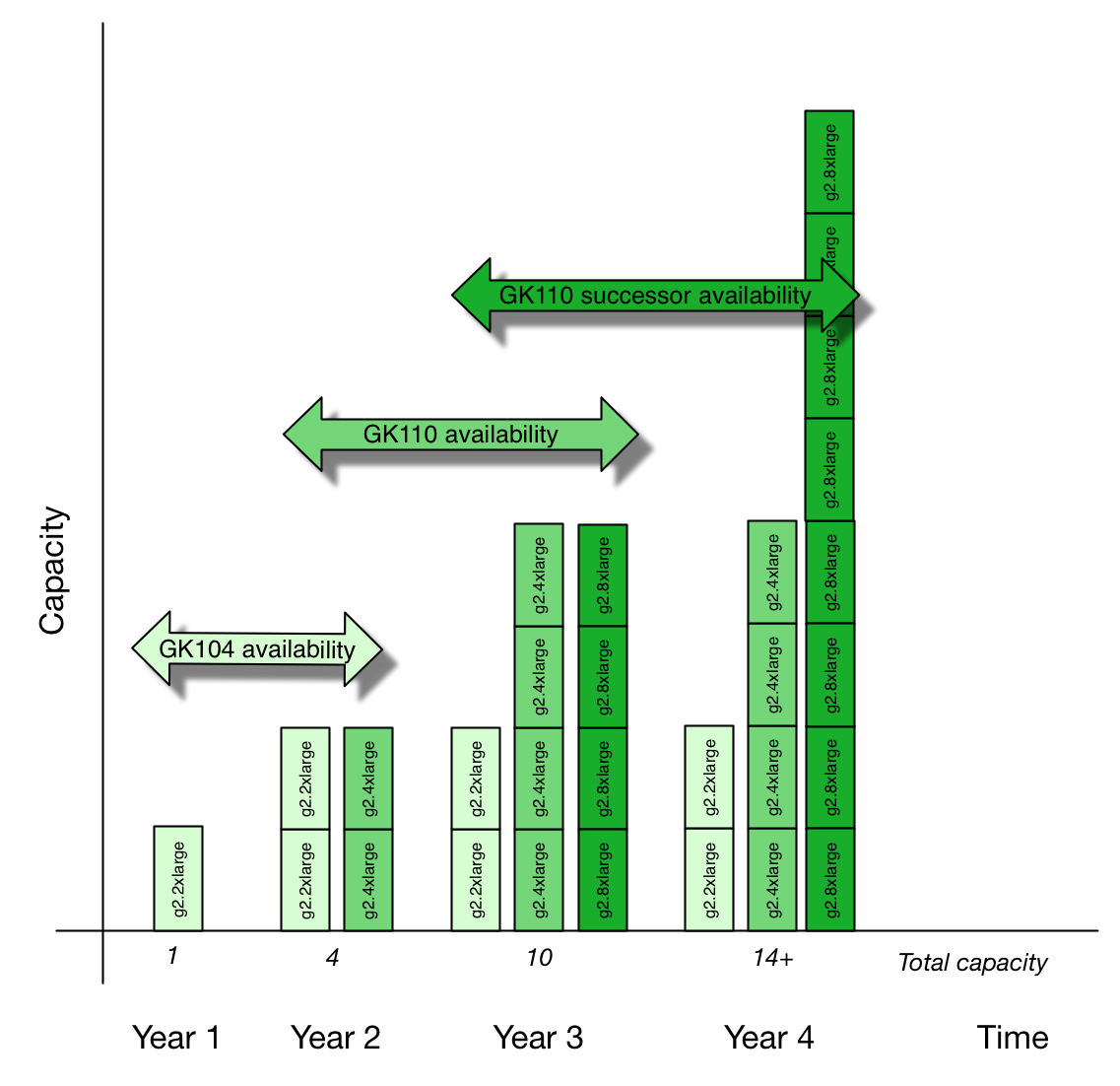 Note that I’m counting instances, not CUDA cores in the above graph! Also, the choice of 4xlarge and 8xlarge is arbitrary, they could be 3xlarge and 4xlarge equally well. My point is in hardware generations, not per-instance computing horsepower.

Assuming that in year 3 you are need some GPU horsepower, but you would be satisfied with g2.2xlarge. There are two potential outcomes:

AWS is going to handle this situation somehow. It is possible to control demand via pricing. Future GPUs may support GPU virtualization (Kepler already has some hardware virtualization support) in a way that allows more flexible partitioning of GPU resources between multiple instances. They might do something else. I don’t know.

Anyway. If the first case happens and g2.2xlarge instances go fallow and there’s no demand for them after 1-2 years then how long is AWS going to keep them taking space in racks and costing maintenance effort? In this case there is bound to be a write-off at some point and the whole instance type would be nixed from inventory.

However even if they manage to keep g2.2xlarge instance demand up at some point hardware maintenance is going to exceed the marginal profit gained from keeping g2.2xlarge instances running instead of using the same space, electricity and personnel for something other. Since it is not possible to replace failed machines with identically speced machines (remember, GK104 no longer in production at that point), hardware failures are also going to slowly drain the instance type capacity down too.

So my final point is this: for instance types specified in terms of hardware, it is likely that they have a limited lifetime as that particular instance type (the hardware may live on, repurposed to serve another instance class).

When the underlying hardware becomes unavailable and that instance type’s capacity cannot be increased anymore, its fate is set. The maximum lifetime is the useful lifetime of the hardware (about 5 years), but due to economic reasons it may be also less.

Note that the above reasoning applies also to c3 and other classes that are specified by their CPU type. Yet, for CPUs the situation might be a little different. The t1, m1, m2 and c1 classes already run on multiple CPU generations. As Ou et al. show in their paper Exploiting hardware heterogeneity within the same instance type of amazon EC2 there are several CPU generations with different performance already deployed in AWS.

So for those instance classes which are not bound to a specific set of CPU or disk configuration AWS can just keep adding capacity using the current hardware generation. Yes, some customers get more recent (e.g. more powerful) hardware, but if you are really interested in raw performance these aren’t really your choice anyway.

Eventually c3 class with Intel Xeon E5-2680 will suffer the same fate as g2.2xlarge with Kepler GK104 — that specific CPU won’t be available indefinitely. Will AWS at this point introduce c4, and let c3 keep running as long as it is economically sensible?

Alternatively AWS may choose to re-define c3 to have a physical processor as “Intel Xeon E5-2680 or <whatever is the next generation>” and keep it running with the same caveats about hardware heterogeneity as t1/m1/m2/c1 classes.

One more possibility is that if AWS introduced c4, what would they do with c3 capacity in case its demand goes down? Since the hardware is completely capable of being serving the non-hardware specific instance types (t1/m1/m2/c1) it is possible that AWS decides to move any machines no longer in demand into “graveyard” instance types where the specific CPU classification is not relevant.

What lies in the future?

While writing this post I came up with the following insights:

If you want my guess on which instance types will be retired first, my guess is something from c1 or m2 classes. At least unless their prices get substantially cut to make them cost-competetive with m3 and i2 classes to keep demand (and cash flow) up.

How does this affect you?

If you are concerned about instance availability,

This is starting to feel like the cereal aisle at the grocery store. Are you going to pick up the müsli with “berries and nuts” or “berries and plenty nuts” or “fresh nuts and berries” or “nut and berry extragavanza” or just “plain” or …

Then you might want to check out AWS & strategy over the years, Betatesting AWS certifications tests, re:Invent — growth pains and re re:Invent.